When Gina DiCenzo and Luke Robinson went on a first date at a Creole restaurant in 2012, they had no idea that the meal would foreshadow their New Orleans wedding six years later. The couple met as first and second-year students at Ithaca College, however, according to Gina, “nothing sparked between us until his senior year and my junior year.” Years later, on December 15, 2018, they said “I do” with an epic destination wedding in the Big Easy.

“We’ve visited the city a handful of times and it holds near and dear to our family’s hearts,” Gina says of bringing their nuptials to Louisiana. But once they committed to a destination, they then needed to settle on a venue. Luckily for them, the decision was easy—Il Mercato was exactly what they were looking for. “We wanted a venue that was effortless, beautiful, and welcoming, and that’s exactly what we felt the second we walked into Il Mercato,” she recalls.

Between the open courtyard, cozy outdoor fireplace (a perfect amenity for a winter wedding!), and European-style architecture, the couple created a romantic, warm and timeless atmosphere for their 260 guests. Of course, the destination wedding wasn’t without local touches, either: After saying “I do,” the newlyweds led their guests in a second line parade through the city’s streets and served a Creole-inspired cuisine.

Keep reading for all the details on Gina and Luke’s glamorous destination wedding in New Orleans, as planned by Elyse Jennings of Elyse Jennings Weddings and photographed by Love is Rad.

A timeless and sophisticated invitation suite set the tone for the nuptials, which centered around a neutral color scheme of white and ivory with greenery and gold accents.

To prepare for a second-line parade that would immediately follow the ceremony, the couple creatively printed their ceremony programs on handkerchiefs that doubled as wedding favors and props.

Gina fell in love with more than the lace and pearl details of her fitted Leah Da Gloria gown. It was the name of the dress, Florence, that reaffirmed it was the one. “Florence was my Nana’s name who passed unexpectedly the year before,” recalls the bride. “Not only was the dress the most beautiful piece of artwork I’ve ever seen, but it was also a sign from my Nana, so I didn’t second guess it at all and bought it. This way, she could be with me every second on our wedding day.”

She also worked with the designer to make a few custom alterations to the bridal gown, exchanging the original straight neckline for a rough sweetheart cut and adding loose off-the-shoulder sleeves.

“I was obsessed with the idea of them wearing all white but wasn’t wild about any of the dresses I was finding,” shares Gina of her bridal party’s attire. She finally found sleek one-shoulder jumpsuits for her bridesmaids and a strapless dress for her maid of honor. “They were the epitome of sophisticated yet stylish and were honestly such a hit!” 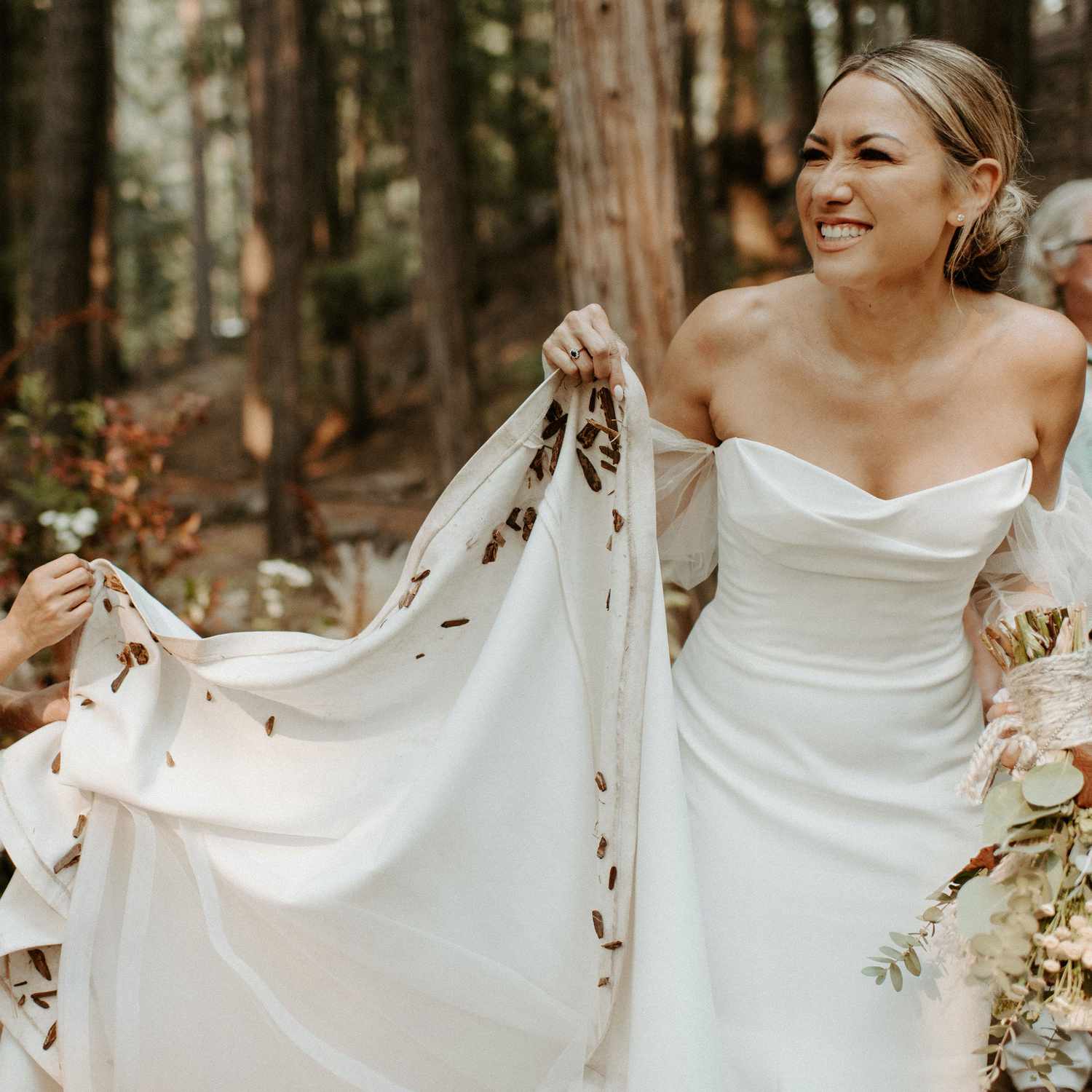 Everything You Need to Know About Wedding Dress Preservation

Formal Mother-of-the-Bride Dresses for Every Season and Style

Weather
You need to set the Weather API Key in the theme options page > Integrations.
Recent Tech News
Randomize
Fashion Designer
Facebook Twitter WhatsApp Telegram Viber
Back to top button
Close
We use cookies on our website to give you the most relevant experience by remembering your preferences and repeat visits. By clicking “Accept All”, you consent to the use of ALL the cookies. However, you may visit "Cookie Settings" to provide a controlled consent.
Cookie SettingsAccept All
Manage consent